We have joined the FOLIO community 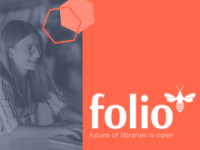 Since April 2022, we have been a formal member of the FOLIO community and thus support the further development of a next-generation library system both ideally and financially.

Borrowing and returning books, acquiring and managing literature – for university libraries this has been unthinkable without software support for many years now. Traditional library systems do not adequately support electronic media – a requirement that the digital transformation is increasingly placing on university libraries. Closing this gap is the goal of so-called next-generation library systems.

One serious candidate for such a library system is FOLIO. It has been thoroughly and comprehensively tested by a task force of the Bavarian Library Network (BVB) since the beginning of 2021. FOLIO is interesting – not only, but also – because it is a web-based open source software. This allows to collaboratively adapt the system optimally to the specific needs of different libraries.

FOLIO has been developed cooperatively since 2015 by an international community supported by libraries all over the world and is characterised by its openness and modularity. The development has now progressed so far that FOLIO is a real alternative and is already being used in library operations at renowned institutions such as Cornell University.